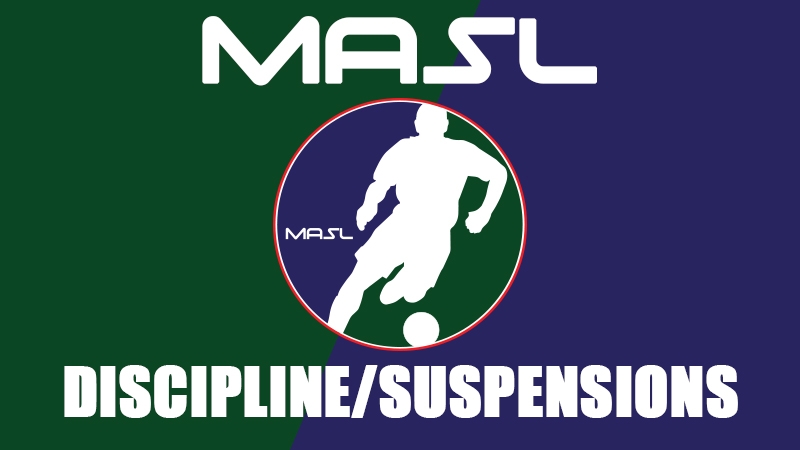 Leo Gibson (Kansas City) - R2 issued on 3/7. Appeal to DRC ruled that red card would not be overturned. One game suspension served on 3/8.

Alessandro Canale (Tacoma) - R8 issued on 3/8 for 3rd penalty accumulation. One game suspension to be served on 3/13.

Simon Bozas (Dallas) - R2 issued for offensive, insulting, obscene or abusive language on 3/2. One game suspension to be served on 3/14.

Note: A player cannot accumulate more than two (2) penalty points per match as the player is automatically ejected for infractions beyond a two (2) point accumulation.

Red Card Ejections
Ejections will count as two (2) points (Exception:  No penalty points will accumulate for a player who is ejected for six (6) fouls in a match).

(R3) Red Cards due to accumulation of cards in a single game are counted 2 points, not 3 points.

Embellishment/Simulation (Faking):
Embellishment is defined as an attempt to make contact appear more severe than the contact made and/or a prolonged reaction. Simulation/Faking is defined as an attempt to deceive the referee by falsifying contact.
In the event a player engages in obvious embellishment/faking, this player can be penalized with a penalty point towards accumulation. However, if such act has a material impact in the game, the player may then be suspended and fined.
Those instances of embellishment/faking which by definition have a material impact on the match are as follows:
1. Opposing player receives a red card
2. Opposing player receives a time penalty (blue or yellow card) and such time penalty results in a penalty point accumulation.
3. Opposing Team is awarded a penalty kick or shootout.

The MASL Discipline Review Committee will assist to ensure player safety and preserve the integrity of the game.

The MASL Disciplinary Review Committee will use the following guidelines in determining when it can act after a game has been completed:

1. Where the referee does not see the incident (e.g., an off-the-ball offense) and therefore does not have the opportunity to act:

• Review any video evidence and may act to discipline a player (The act must be a clear and obvious red card that was missed by the referee due to lack of view).

2. Where the referee sees an incident, and issues a red card:

• May review the play for further disciplinary action, over and above the mandatory one game suspension.

• The committee will add suspension(s) over and above the mandatory one game suspension for those offenses deemed to be of an egregious nature, or where the committee believes it must act to protect player safety or the integrity of the game.

3. When the referee sees an incident, issues a time penalty (anything less than a red card), but does not issue a red card, the following shall apply:

• The committee will act on incidents which warrant a game(s) suspension;

• The play in question, in the opinion of the Committee should have been a clear and unequivocal red card; or

• The play in question, in the opinion of the Committee is an egregious act or repetitive behavior in nature and the Committee must act to protect player safety and the integrity of the game.

Reviewable incidents include, but are not limited to: violent conduct, contact to a player’s head/neck/face region when deemed to be excessive force, simulation (faking) / embellishment to gain a foul or time penalty, mass confrontation, players leaving the bench to join an altercation. The following parameters will apply:

• The play in question is, in the unanimous opinion of the committee a clear and unequivocal red card;

• The play in question is, in the unanimous opinion of the committee, an egregious incident and must be acted upon to protect player safety or the integrity of the game.

2) Opposing player receives a time penalty (blue or yellow card) and such time penalty results in a penalty point accumulation.

3) Opposing Team is awarded a penalty kick or shootout.

A Team may request a review of a Red Card to rectify a case of clear and obvious error of the decision of the Referee. Within twenty-four (24) hours of the completion of a match, teams must send written notice detailing the rationale for the appeal and include video evidence supporting the appeal. The decision must be unanimous. The Disciplinary Review Committee is not re-refereeing the game; it is rectifying clear and obvious errors in the referee’s decisions. Therefore, if it is not obvious then it does not need to be rectified.

(Undisclosed fine amount) – No Team owner, coach, staff member, or player shall threaten game officials either verbally or physically nor make physical contact in any manner with a game official.  Coaches and team staff shall not approach game officials prior to the game, at the end of a period, on the way to or from the locker room to lobby for a certain call, discuss the approach to the game or to criticize a game official’s performance.  The Crew Chief shall report any such incidents to League Management and the offending individual(s) shall be subject to a League fine and/or suspension.

(Undisclosed fine amount) – The MASL may impose fines and/or suspensions for abuse or assault toward game officials.  The MASL may use referee reports, eye witness’s account and video to make any determination.

(Undisclosed fine amount) – Owners, Team Staff, Coaches, Players and Team contracted online streaming game announcers may not disparage referees or referee decisions in press releases, quotes provided to the Media, on social media, or during stream game broadcasts.  Fines will be levied accordingly based on the nature, severity, and context of the comments made.  Suspensions at the Commissioner’s discretion.

Players and Coaches serving suspensions are NOT allowed on the team bench during the game. They must watch the game from the stands or the locker room and must be out of site and sound.  The player or coach serving the suspension cannot be in the vicinity of the team bench area, goals, or close to the field/boards. A suspended coach or player during a game scenario would be permitted contact with his team during warm-ups, up until the start of the game.  Once the game starts a suspended coach or player shall have no contact or communication, even at halftime or in the locker room or via phone/text.